Many regard the resurgence of the Oak Cliff community with a mix of awe, hopeful optimism, and wonder.  If you’re like most, you seek to understand the driving forces at work, and identify ways to capitalize on the changes.

In general, Oak Cliff is the antithesis of the rest of Dallas north of the river and the outlying suburbs.  The reason is that, due to the lack of traditionally attractive metrics such as average incomes, traffic counts, and population density, Oak Cliff has an abundance of charm, character, and diversity.   Due to the these factors and that it has historically been more affordable, it has attracted the “creative class,” which is almost always eventually discovered, appreciated, and followed.  In short, Oak Cliff is more interesting.

While the housing stock is comprised of very diverse architecture, thoughtfully preserved, with an equally diverse topography, the commercial properties are somewhat sparse and functionally obsolete.  The thought leaders in the community, taking cues from other similarly situated urban areas having undergone renewal, have applied creativity in finding new uses for old properties.  The oft-cited example of success is the Bishop Arts District, which is now home to some of the most creative restaurant concepts in the city, making it an “in-town tourist destination” of sorts.

Residents, businesses, and property owners are fortunate to have Jason Roberts and Andrew Howard of The Better Block as residents and thought leaders.  Click on this link to watch Jason explain his methods and madness at his TEDxAustin talk. 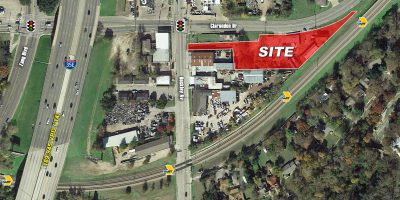